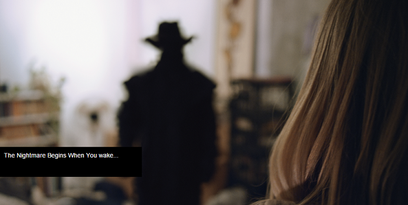 The Man in the Shadows

It starts with a nightmare. Rachel Darwin is pregnant, shackled, giving birth to something terrible, attended to by a dark man in a brimmed hat. She struggles to wake, opens her eyes and he is there. The next day she finds out she's not alone, many others see that Hat Man too.

Her husband, Scott, believes her but thinks there is a scientific explanation. Sleep paralysis. Electromagnetically induced hallucinations. Ultimately he just wants to get laid, married three months and the union unconsummated for the reasons discussed which he can't understand.

Rachel speaks of the Hat Man at group therapy. The addicts and loners reject her, except for William (of the latter). He believes her more than she believes herself. Multidimensional beings, shadows that feed upon human souls etc.

Scott and Rachel go north to the woods, maybe a break will help, but the Hat Man gets closer. Scott's frustration builds as her sanity slips. She slips into an intoxicated dream confronted by horrors of her past. The nightmares are getting worse.

She seeks the aid of William who puts her under hypnosis and guides her deeper than mere dreams into astral projecting. But it is getting harder to know what is real and what is not and that includes the Hat Man.